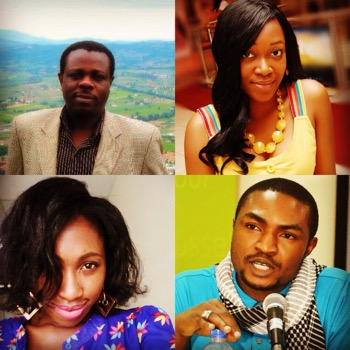 Posted at 10:30h in Uncategorized by parresia01 0 Comments
0 Likes

Parresia is pleased to announce our 2015 List for the Parresia Books Imprint. Well over a hundred manuscripts were submitted from within Nigeria and from outside the country. Of these, four manuscripts were chosen. Of these four, three are debut novelists, two are new writers, one is an old Parresia author with a new book out and one is an already established, immensely distinguished writer. All four will be joining Helon Habila, Emmanuel Iduma, Victor Ehikhamenor, Chika Unigwe and Molara Wood at the Parrésia Books imprint.

Ifesinachi Okoli-Okpagu is a Lagos based Marketing Communications executive with over six years’ experience, including being an Associate Producer of a pan-African TV show and managing Fabulous City—a community for young & ambitious business women. Her first book, a novella, was published when she was fourteen. She was educated at Queens College, Lagos, and at the University of Benin where she obtained a BA in Fine and Applied Arts. Ifesinachi also holds a Masters from the Pan-African University. She has written several stories, some of which have been published in Sentinel Nigeria, the Femrite Anthology and Saraba Magazine. Ifesinachi has written/produced eleven screenplays.

Lagos Girl is a novel about the unnecessary pressure on women to take on life partners, regardless of who these partners are. Its style, one of realism, explores the psychological impacts of this through the stories of two sets of sisters—Munachi and Nkechi versus Chimuanya and Elizabeth. The role of religion in shaping our decisions forms a backdrop against which Munachi’s story unfolds.

On a Sunday afternoon years ago, two sisters walk in on their father’s sexual liaison with the family’s hired help which leaves them both scarred in different ways.

Unable to bear the thought of marriage to man she barely knows, the younger and more adventurous one, Munachi, runs away from home on the eve of her traditional marriage, unwittingly resurrecting a long buried feud between her mother and aunty. This conflict leaves a door open for the family’s destruction.

Abubakar Adam Ibrahim is a Nigerian writer and journalist with several accolades to his name. His debut short story collection The Whispering Trees (Parrésia Books, 2013) is currently a recommended text in several Nigerian universities and was longlisted for the Etisalat Prize in 2014 with the title story being shortlisted for the prestigious Caine Prize for African Writing. Abubakar has won the BBC African Performance Prize and the Amatu Braide Prize for Prose. He is a Gabriel Garcia Marquez Fellow and a Civitella Ranieri Fellow and has been listed by the Hay Festival in the Africa39 list of the most promising sub-Sahara African writers under the age of 40.

The affair between 52-year-old widow Binta Zubairu and a 26-year old political thug and weed dealer simply known as Reza is bound to cause a ripple in the conservative society they find themselves. For Binta, there has always been the need to unshackle herself from the sexual repression that characterised her marriage and a deprivation that typified her widowhood. But beyond that, there is her desire to redeem herself for the loss of her first son, whose tragic death haunts her still. So, when the thug, Reza, whose real name not many people remember, arrives with a heart emptied by the absence of a mother who abandoned him when he was months old and rekindles Binta’s passions, they strike it off.

But their relationship is strained by the demands of their different lives; for Binta her family and questions of morality and shame, for Reza his dangerous life on the other side of the law.

Beyond the disapproving stare of society, there is also the outrage of Binta’s children, who are all older than her lover.

Set against the background of politics and religion in northern Nigeria, this novel unfurls with grace and delectable prose, revealing layers of human emotions and desires.

Nwosu is a fellow of the Akademie Schloss Solitude, Stuttgart, Germany and the Civitella Ranieri Centre in Umbertide, Italy, as well as a member of the Phi Beta Delta Honor Society for International Scholars.

A Gecko’s Farewell centres on three Africans from different parts of the continent who meet “in the spirit” (online) and plan to found a School of Stories. Etiaba is a village schoolteacher. When he loses his job, he moves to the capital city—and its world of prayer contractors and hope merchants. Mzilikazi’s is the story of “the homeless specter, the boy soldier, the fugitive, the exile”—the story of a black South African dislocated under the Apartheid regime. Nadia is a radical student of photography at the American University in Cairo. She becomes a photojournalist and takes the picture of an Islamist terrorist, an act that endangers her.

These three characters eventually ‘escape’ from Africa, but Africa is in a sense inescapable. They ‘meet’ at an online forum and forge a therapeutic friendship, but their coming together also embeds the seeds of their eventual separation.

In the end, each of them returns ‘home,’ but not quite in the manner that he/she had dreamed. Etiaba returns to Nigeria (from New York) for his father’s funeral and discovers in the tale of a ‘fisherman’ the story that had followed him around the world and which he believes marks his homecoming. Mzilikazi marries a white woman (in London) and chooses his gravesite – or has it chosen for him – beside that of the man who had been responsible for the destruction of his village. Nadia, who had fled (to France) from an Islamist jihad, explores her mind as she prepares for a new life in Nigeria with Etiaba, whom she had become engaged to online. These ultimately interlinked lives in some respects suggest a new (or an alternative) way of being and meaning. As Etiaba muses: “Why should I live in a new world only in an old way?”

Amara Nicole Okolo is a young lawyer from Anambra State. She began writing at eight while growing up in Kaduna, Owerri, Uyo and Umuahia, early activity she believes has helped in making her the writer she is today. Her romance novella, Black Sparkle Romance, was published in 2014 by Ankara Press, an imprint of Cassava Republic. References to her work have appeared on The Guardian UK and Africa, CNN, Africa In Words, Okay Africa, Brittle Paper and Chimeuraga. She loves cupcakes and green tea, and when she is not writing, she spends her spare time drawing, painting, collecting buttons, establishing her fashion business and taking photos of random places and people she meets on a regular day. She currently lives in Abuja.

A university graduate in desperate need of a job. An illiterate farmer’s vengeance for a dead son. A young pragmatic man humbled by the horrors of incarceration. An old man’s dying gift to a generation. A journalist’s courage in a notorious military government. A youth Corper’s temperance of religion, love and survival.

From the quiet town of Umuahia, to the plains of the Jos Plateau, and the bustling hub of Lagos, these Nigerian men have stories to tell. Stories of life, love, family, happiness, sorrow, pestilence and death—situations faced every day in their lives. Armed with objectivity, some find peace with their resolutions. Others face dire consequences with prices to pay—with their freedom, or even worse, with their lives.