Nolstagia in From the Crevices of Corps Hearts 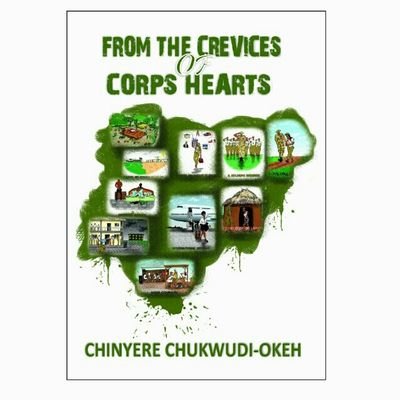 04 Dec Nolstagia in From the Crevices of Corps Hearts

Posted at 17:14h in Uncategorized by parresia01 0 Comments
0 Likes

Life happens to us in phases, each phase playing out with its own unique experiences. Some experiences are more memorable than others; there are the ones we revel in and want to relive if we had our way, and there are the moments for which we crave selective memory and wish to forget. Most of us are, more often than not, too caught up in the process of living to try capturing these experiences in a definite medium, but there are a few who care enough to save the memories, and ultimately, put the moments out there for the sake of those who either want to know what it’s like, or who want to catch a glimpse of some of the moments they were too busy to savour.

Chinyere Chukwudi-Okeh holds a Bachelor’s Degree in English obtained from the University of Ibadan, and is on the verge of obtaining a Master’s Degree in English from the University of Lagos. A lover of extracurricular activities, she is the convener of Literati Generation Movement, a creative and humanitarian project that seeks to impact humanity through writing and other means.

“From The Crevices Of Corps Hearts” is a collection of ten short stories that explore the intricacies and unique experiences that come with the compulsory national youth service year. In 148 pages, Chinyere tells us what the National Youth Service Corps (NYSC) program entails, from the perspectives of ten different individuals, each with their own version of events. The relevance of the scheme, and the question of whether it has come close to achieving what it was set up to do, are issues for another day (and probably another author’s book), but Chinyere’s business here is to show us what it means to be a corps member, from the days of the orientation camp to the passing out parade.

“Burdens and Bundles of Dreams” dwells on the anxieties of recent graduates turned new corps members, from long cross-country journeys to fatal road accidents and deplorable camp facilities. “Forests Of Faeces and Chemistry” is the story of a lady who shoves her long-term romantic commitments aside for a few trysts during the three-week orientation camp. “A Feminine Dream” takes us into the world of Imaobong, who works her way to a commercial city, but ends up with a stripper pole as her Place of Primary Assignment when financial difficulties threaten to crush her. “My Pumpkin Love” explores finding love in remote places, teenage marriages and statutory rape. With “Love Like A Soldier’s”, we see how a difficult childhood influences ideas of masculinity and the choice of love interests.

In “The Longest Meditation”, Chinyere recounts a solemn rainy morning where one corps member reminds the rest of patriotism and values. “Robbers and Rubbers on the Fields” has to do with the pangs of a heartbroken lady, and her bird’s eye view of the three weeks of lasciviousness. “A Soldier’s Musings” (the shortest story in the book) is a uniformed man’s take on the NYSC process, “Mami Courage” is about two friends from the South-South geopolitical zone whose bond threatens to go slack when their adventures during service year wind down to a state of uncertainty after the passing out parade, and “International Sisi Eko” is a foreign-trained lady’s rude awakening to life as a corps member in Lagos, amidst rapidly waning enthusiasm.

The stories are all relatable, they are real, and for anyone who has ever donned that lemon khaki and orange boots, “From The Crevices Of Corps Hearts” brings a heavy feeling of nostalgia. All the adventures, all the dreams, all the mischief, attempts at romance, compromises, expectations, and uncertainty after the ride is over, are brought to the fore here. Each piece begins with a short dose of poetry, and some of these pages will make you laugh, some will remind you of the boyfriend you cheated on, the doting love-struck indigene you left behind, the friends you made at that lodge, and what life has been since you received that certificate.

For all her brilliant effort, Chinyere needs to, however, check out a few things, for the purpose of future writing. A number of terms, phrases and expressions indigenous to the average Nigerian were not only italicized, they had glossaries made of them. This caused me to cringe, as it defeats the essence of originality in the African narrative. The year is 2017, and we cannot be trying to explain pidgin English, local slangs, or names for foods that are unique to us. Part of a writer’s job is to export narration; if foreigners want to know what Kai Kai, Sisi, Okada, Suya and Nkwobi mean, they should Google it or forget it. The attempt to define these things tainted the book a bit for me.

Chinyere makes use of a lot of imagery in this book, and it is beautiful, but midway through this book, you just want to find her where she is, stare into her eyes and say “calm down, we get it, you write beautifully”. Metaphors are good, and a little narrative showmanship is allowed, but too much of it puts a writer in danger of committing a literary overkill. She should take it slow.

Ultimately, “From The Crevices Of Corps Hearts” is a pretty good effort for a first book. You may have heard these stories before, but a little freshness is always welcome, and it’s an easy read, so you don’t have to pass it up.