Amara Nicole Okolo on the Inspiration behind Son of Man. 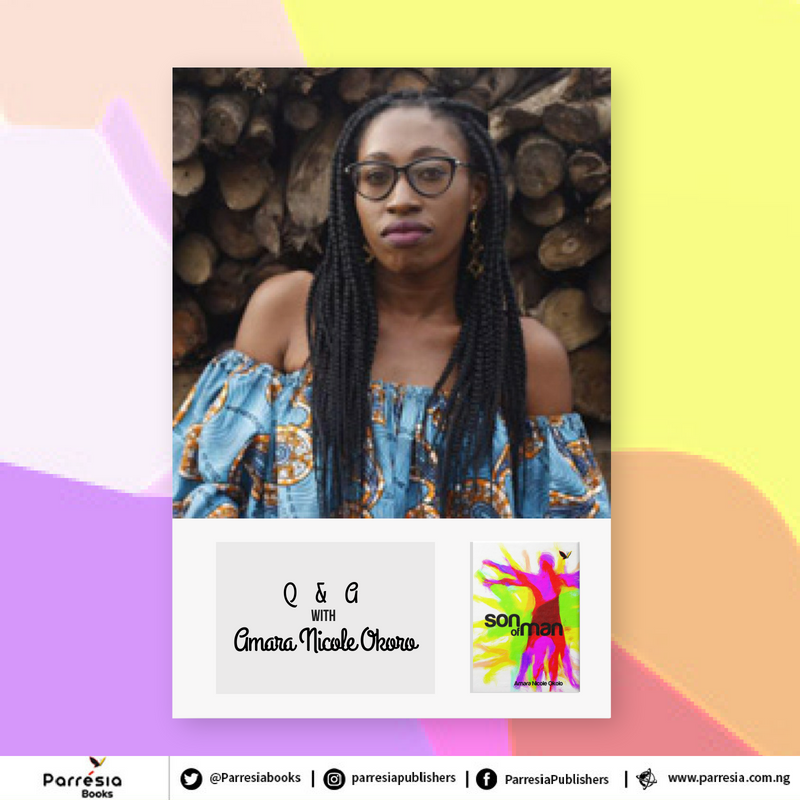 30 May Amara Nicole Okolo on the Inspiration behind Son of Man.

Posted at 09:24h in Uncategorized by parresia01 0 Comments
0 Likes

1. Tell us a bit about yourself and what you do for a living.

Amara is a lawyer, artist and designer, but mostly a writer these days. By day I work as a communications/media specialist and sometimes a lawyer and editor, and by night I work at my desk, writing my novel. When I’m not writing or doing any artsy stuff, I spend time reading, answering questions on Quora, watching French, German and Spanish movies with subtitles (a clever way to learn new languages), and restaurant-hunting with my friends. I also have an infallible love for dark chocolate with sea salt.

2. When planning Son of Man, how did you decide these stories were the ones you wanted to be shared with the world?

When I became a writer, I promised myself to write about the human experience as best as I could. There are so many things that make us different and similar at the same time, and those attributes fascinate me. Writing about it and sharing these experiences as honest as I can is a privilege, and Son of Man was a way to show it. Sometimes, things we overlook or tend to forget are what determine our futures. The death or disappearance of a loved one, depression, abuse, happiness, pain, affection—these things can make or mar a person. So Son of Man was my way of addressing emotions but through different perspectives, ways and through characters expected to hide their emotions—men, women, and generally, the damaged.

3. How did you come about creating such relatable characters? Are they based off real people or did they all come entirely from your imagination?

Every character in Son of Man was inspired by real people. Some are relatives, some are dead now, some I never met in person but I was aware or told their stories. One of the stories was entirely based off a legal case I came across while in Law school! I think this is why the story resonates with whoever reads it—you can see yourself in their shoes, feeling what they feel. It was a thrill writing it.

4. 500 Dreams and a Letter is a very cunning tale with surprising twists. What moral message are you trying to pass along to a reader with it?

Funny thing you asked because 500 Dreams and A Letter was actually the story based on the case I came across in Law School. The case is not very similar to the story, but it included a father estranged from his children and loved only by a daughter. I remember when we were told about the case during a lecture on Wills and Administration of Estates. As the lecturer went on telling us about the case, which at the time was on-going in court, everyone was sad because it was definitely going to end badly for the daughter. I was most upset because I felt the daughter deserved better, so when I went back to the hostel, I wrote the story. I imagined happiness for the daughter, spinning the story to get her that happiness by one of the topics of the Wills lecture—the allocation of gifts by the dying which in Law, cannot be contested. It made me feel fulfilled, and even though I never knew the outcome of the original case, having that story made me feel somewhat satisfied. I am glad so many readers feel the same way too.

5. In Son of Man, all the stories end on a tragic note, is there a reason for this theme reoccurring?

Not all stories ended tragically—The Talking Shoes and 500 Dreams and A Letter were the exceptions. I did not just set off from the onset to make other stories end tragically. I love happy stories. But whenever I write, the stories come alive. They are a being, with a voice, directing me on the way to go. I am merely just a messenger! And I feel with the overall theme of the book, which is to highlight the suffering and predicament of men in the African society, the stories did justice to take that route.

6. The stories all highlight issues majority of people face in their various lives, so how would you paint and convince potential readers of the importance of Son of Man today?

The stories of Son of Man are what we see every day. We hear about them in the news, we see them in tabloids. These stories are quite rampant—suicides happen, people go missing, police brutality—name it. I want people to be aware of these things and should address it because, in our own way, we can make a difference. We have neighbours who are depressed, maybe on the brink of suicide. We may have had friends or family that have disappeared and never been found. We have had children die of negligence in our medical hospitals. Though we may not generally change the status quo yet, we can do something by reaching out to them. People go through various forms of pain and grief, and that can change them drastically. So we should always be aware because, honestly, nothing separates us from these people. They are humans like us, and we can be in their shoes one day. Nobody can tell the future.

7. What was your introduction to the literary world? Did you read any African literary works that inspired you to start writing your own tales?

I read a lot of books as a child. I’ll always remain grateful to my parents, especially my late mother, for encouraging me to read a lot. By age five, I already had a library card, so I spent so many afternoons seated in between tall shelves of books and magazines, reading everything I could get my hands on. This made me curious, fascinated and conversant with the literary world and my imagination from a young age. I began reading most African literature like Mine Boy, The Only Son, Arrows of God, Efuru, Wives at War, and almost all the books from the Pacesetter Series when I turned 10 or 11, can’t really remember. But I actually began writing at age eight, so they did not spur me into writing. Rather, they helped me relate better with writing about the African experience better.

8. What’s your view on Publishing in Nigeria?

It’s hard. The little I know shows how tedious it is, and how expensive it is to churn out these books for the public. I applaud every effort made, but I know more can be done. Hopefully, things will change in time.

9. What’s next for you? What are you working on now?

I’m currently working on a novel, and in between, writing more and more non-fiction short stories.

10. What words of advice can you share with aspiring writers?

On this writing business, the journey may be far, the road may be twisted. You will thirst for more, burn out, your heels will crack open from so much walking. But only by determination— a little perseverance and networking—can you get to the finish line. And at the finish line, all wounds get suddenly healed. So keep walking, and writing.