In Search of Life Elsewhere

25 Jul In Search of Life Elsewhere

Posted at 08:39h in Uncategorized by The Parrésia Blog 0 Comments
0 Likes

The epigraph to Ifedigbo Nze Sylva’s debut novel, My Mind is No Longer Here is culled from Kurt Vonnegut’s Slaughterhouse-Five: ‘[…] life is just a collection of moments all strung together in a beautiful random order […]’. Sylva borrows this to narrate the story of four young men — Donatus, Haruna, Osahon and Chidi — connected by their obsession to travel abroad in search of greener pastures. My Mind is No Longer Here capitalises on symbolism, further deploying flashback and foreshadowing to pattern the plot, while shaping the characters fully well in social realism. This combination puts the events of their lives into perspective to shed critical light on their ambition, as well as the mobility of African youths, as a syndrome indicative of the dysfunctional socio-economic space that is Nigeria.

Donatus is a man haunted by his fear of failure having seen it manifest in his father’s life, who also wishes Donatus a humble dream. But he wants to aim and succeed bigger and prove his father wrong. He moves far away from him to the city of Lagos, ending up as a poorly paid and unfulfilled photojournalist for the Eagle Post newspaper, even though he read Human Anatomy in school. Quitting this dissatisfying job one morning, walking out of the office he observes:

“[…] a strange rainbow [that] was brightly coiled across the sky. It was a near-perfect circle – not the usual arc – but there was no threat of rain. When he was growing up in Enugu, they would say that an elephant was in a shed somewhere giving birth whenever the weather was like that. For a brief moment, Donatus wondered if it held any symbolism for him – like a new beginning. He was superstitious like that.” (p. 8, emphasis mine)

Describing the rainbow as ‘coiled’ as if it were a large snake poses it as an evil omen. This is further emphasised in the use of ‘threat’ when describing the absent rain. These are inverted symbols misconstrued by the character that will impact on his next moves, thus alerting the reader to beware of false hope. This technique also elevates the narrator’s position to that of omniscience, beyond the circumference of the immediate narrative perspective of Donatus’ inner life. In so doing, Sylva foregrounds the character with modern African lore, contrasting his childhood innocence with maturity, juxtaposing these early, formative stories with the complications of adulthood.

The childhood of Haruna, on the other hand, has been cut short and the weight of adulthood cast upon him very early when he has to become a man for his mother after his father’s absence. Sylva paints Haruna as someone with a respectable profession, throwing the dissatisfaction of someone like Donatus and his working life into relief. But although Haruna has made it as a medical doctor, when he loses his mother due to inefficiency and the lack of medical resources that have plagued medical practice in Nigeria, his reasons for investing his hopes and skills elsewhere are summed up. Still, a friend he broaches the ambition to leave cautions him: ‘It is not that easy. These embassies see so many desperate people every day, even professors…’ (p. 21). Yet Haruna is bent on having another life elsewhere so as to escape his perceived fear of failure and memories of the death of his father, who was roped into a military coup and summarily executed. Having been entrusted his father’s wedding band and wristwatch, with the word to look after his mother prodding up his masculinity, his powerlessness as a doctor and a man that cannot even save his own mother’s life means these manly symbols become lost in him. The ties of youth and the spiritual, social, emotional legacy that have bound him to home are betrayed and severed.

Echoing this backdrop of violence in the lives of our protagonists, Osahon is a young man ruled by fear of reckoning, having abandoned his degree and fled Benin City for Lagos, where he keeps a low profile. A cultist at UniBEN (the University of Benin), recruited into one of the secret, illegal and often deadly confraternities across Nigerian university campuses, he has been implicated in the death of a rival: ‘The police had placed a bounty on his head. The reward on the “Wanted Man” poster read “N2,000,000” – an amount that could make even the most devout man betray their best friend.’ (p. 25). In another notable instance, Sylva here deploys foreshadowing to underscore what awaits Osahon, who, to be rid of his extreme fear and regain control of his future, too seeks an elsewhere. Unlike Eghosa Imasuen’s Fine Boys (Farafina, 2011), which depicts cultism at UniBEN against the backdrop of the Abacha years as its male protagonists negotiate everyday campus life, for Osahon, it is first Lagos, then the elsewhere’s greener grass that represents a perceived essential escape. For him, this is beyond economic freedom: ‘elsewhere’ is a place of reinvention where nobody will know about his past and where he’ll once again be able to use his real name without fear of being thrown in jail.

A similar timeframe of arrested self-development can be perceived in Chidi’s disillusionment, which sets in on the cusp of completing his bachelor’s degree when he realises that he has very few opportunities to salvage. His obsession with the elsewhere is as a result of the envy he cultivates for a friend who has returned from overseas with a changed demeanour that marks him as the standard of achievement:

“Paul, Paul, you are too much,“ Chidi laughed. “You are talking about my stomach? Look at you. See the folds on your neck. You look like a large fowl!“

“My brother, when you eat, it has to show somehow now,” Paul replied, laughing. His laughter had the self-assuredness of someone at ease with the world, as he sank into the chair by a glass coffee table […]

Paul smiled as he picked a remote control from the glass table and switched on a large wall-mounted television. “Nekene,“ Chidi went on. “If I stay here I will not want to go out again. My man, you have become president o. President suite! Chineke! What is now remaining is for Oliver D’Coque to release a track for you.“ (p. 39)

Chidi is astounded that his childhood friend, who he remembers enjoying teasing and condemning to a miserable life when he chose to drop out of secondary school to learn a trade, could afford a place like the Eko Hotel Presidential Suite, and even tip room service in US dollars. But Paul’s performance of opulence that motivates Chidi to move is just characteristic of Nigerian con-artists who live abroad, returning for a while only to parade their perceived new found status.

The lives of Donatus, Haruna, Osahon and Chidi become intertwined by their common disillusionment that turns into obsession to start afresh elsewhere. Lagos is the postcolonial city they first go to in search of new futures, trying to realise their dreams. But it proves to be a disappointing metropolis that cannot sustain their aspirations, personal or socio-economic. After our introduction to these striving young men and these episodes in their lives, their seeming randomness comes together and full circle when, dogged by their different fears, they meet in the city at Yinka Salami’s, a suave fix-all agent who has his own sinister plan to stoke their obsession with false promises. Will they even make it abroad when they are caught in a scheming greater than their own fear of failure? And what will the flickering epiphanic flashback that Donatus has at the end of the story lead to?

“There was a police van parked by the road just outside the eatery. The siren was not wailing, but the light made the eyes twitch and tingle. It sliced through the impending dusk, painting everything in its path in patches of blue and orange, which became yellow and purple the next second. It reminded Donatus of the strange round rainbow that had appeared over Lagos on the day he resigned from Eagle Post. His thoughts fluttered back to that morning two months ago, when he walked out of the Eagle Post office and saw the rainbow; how he had thought of it as being symbolic of a transition from one reality to another.” (p. 310)

Sylva’s characters symbolise and represent many Nigerian youths, commonly known on the street now as the jápa, who nurture such fixations on the possibilities of new and different ‘realities’ due to limited opportunities. In the hardships of their modern city, their university degree can mean almost nothing in the over-competitive labour market and where, in the end, their dreams are sold out by corrupt agents and institutions, and as much by confidences, friends, and family. As a result, self-exile and abandonment become palatable and they are forced to sweat it out until the very end. As much as the novel is a brilliant read, the reader cannot help but notice the absence of female protagonists: would the cosmopolitan struggles of Sylvia’s four protagonists be any different or more remarkable through the perspective of a female lead, like the life Chika Unigwe’s Chisom had lived in Lagos prior to becoming a sex worker in Belgium in On Black Sisters Street (2007/2009)? Nevertheless, My Mind is No Longer Here is filled with humour and its characters are absorbing in their flaws and absurdities, while its narrative skill makes it a fast-paced read through their ‘collection of moments’, articulating the randomness and peculiarity of existence – taken as a slice of life.

*This review written by Tope Adegoke  first appeared in Africa In Words Magazine. 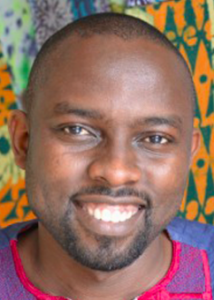