Nothing more graphically captures the above title than the words of Princess herself: “You’ve got to believe in yourself demonstrating your dependability, strength of character and your ability to reach your goals”. Her invaluable super spinning of diction and syntax, the uses of simplicity, the beauty of human connection and conversation, the relationship of success are so long-standing in the course of reading House of Ezyron, so consistent as to constitute a signature.

I wish to pay tribute to humanistic distinction of Princess Izuagba, one of the bills of charges of the family of Mr Victor and Nuela Izuagba of Umola Amaifeke Orlu in Imo State in January 2002. At 18, House of Ezyron is the first child of her brain and the product of endeavour. What does one expect from the first of four children? She attended her Primary education at Rola International School, Miko Abiola Gardens Ikeja, Lagos and one of the pioneer students of the prestigious Jesuit Memorial College, Port Harcourt.

Be informed she is a “voracious reader and a sucker for blockbuster horror and mystery movies”. Talking about her magical and formative years that brought her to a momentous pass of primary exposure, made manifest in one of Prof Chinua Achebe’s narratives, her initiation into the complicated world of Ndi Igbo must have been at the hands of the parents and relations, who furnished her with a number of wonderful stories from our ancient Igbo Tradition, hence her House of Ezyron.

The tales of the Igbo world were steeped in intrigue, spiced with oral acrobatics and sing-song, but always resolute in their moral message. Recall the Igbo favourite stories that starred the tortoise (Mbe) and celebrated his mischievous escapades. Princess Izuagba quietly escaped into the inner casements of her mind, where she engaged in deep, reflective thoughts of languages, religions and cultures. The endpoints are the appreciation of the power and solace in silence plus gratitude.

House of Ezyron must have been sparked by the tension between the Christian religion of Princess Izuagba’s parents and the retreating, older religion of her ancestors. Some of her modern and ancient relatives were able to bestride both works with great comfort, hence her enriching experience showcased in her book, now of much acclaim even far beyond the continental shelf of Africa. Google Amazon, the House of Ezyron and be informed. 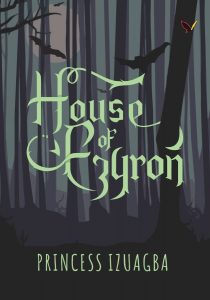 Cover page of House of Ezyron

Princess Izuagba’s dialectic must have been inherited. Get to appreciate her outset back cover pun on her book House of Ezyron: “Being different? Annabelle is used to that. Being a sudden hero? Not so much. When thirteen-year-old Annabelle Nguma discovers that her life, her family and the world is at the brink of destruction due to the uprising of a chaotic deity, she must decide whether to accept her new identity or give in to her greatest nightmare”.

Princess Izuagba in her book must have rhetorically asked herself before the outset of the book “what do I do to who I am? What do I do to history? As a person born into adversity, heir to the commotions, barbarities and rampant upheavals of a continent, a country, in disarray, she has to welcome the remedy proffered by diviners and interprets of a new word of God as narrated in Annabelle’s dilemma on a finger of choice. As a budding writer, her perspective of the world benefited. From the dichotomy, she got deeply more interested in exploring the essence, the meaning, the worldview of both faiths.

By her engagement on the issues of tradition, cultures, literature and language of our ancient civilization in that manner, without judging but scrutinizing, a treasure trove of discovery got opened up to her. She often had periods of osculating faith and periods of doubt, each time she seemingly ponders and deeply questions, the absolutist teachings or the interpretations of religion. She struggles with the certitude of Christianity… “I am the way, the truth and the life”, not its accuracy because as a writer she understands that there should be such latitude, but the desolation, the acerbity of its meaning, the lack of options for the outsider, the other. These questions, I stand to be corrected deeply influenced her House of Ezyron.

Speaking into the thoughts of Princess Izuagba, a figment of my imagination after studying House of Ezyron, I make bold to say, she believes that every generation must recognize and embrace the task it is peculiarly designed to history and by providence to perform. From where she stands now, she could see the enormous value of her forbearers and salutes all who had her back and pushed her forward, especially when she was too lazy to move, thus accepted her differences and made her feel special. How come House of Ezyron, I interrogated Princess Izuagba? She quickly interjected, “I cannot just place it, it came from the blues”. Can you beat that? Her parents gift to her is their love of education, hence she looks forward to going to the University, adds the recognition that whether we look at one human family or we look at human society in general, growth can come only incrementally. Princess Izuagba’s audacity is made manifest in the House of Ezyron.

I would not be surprised if House of Ezyron is short-listed in the Commonwealth Literature Prize and in the NNLG Nigeria Literature. I pray it turns out as one of the best books of the last 36 years in Nigeria to be listed by spectrum Books limited. Goodluck to you the budding communicator and an icon of self-development.