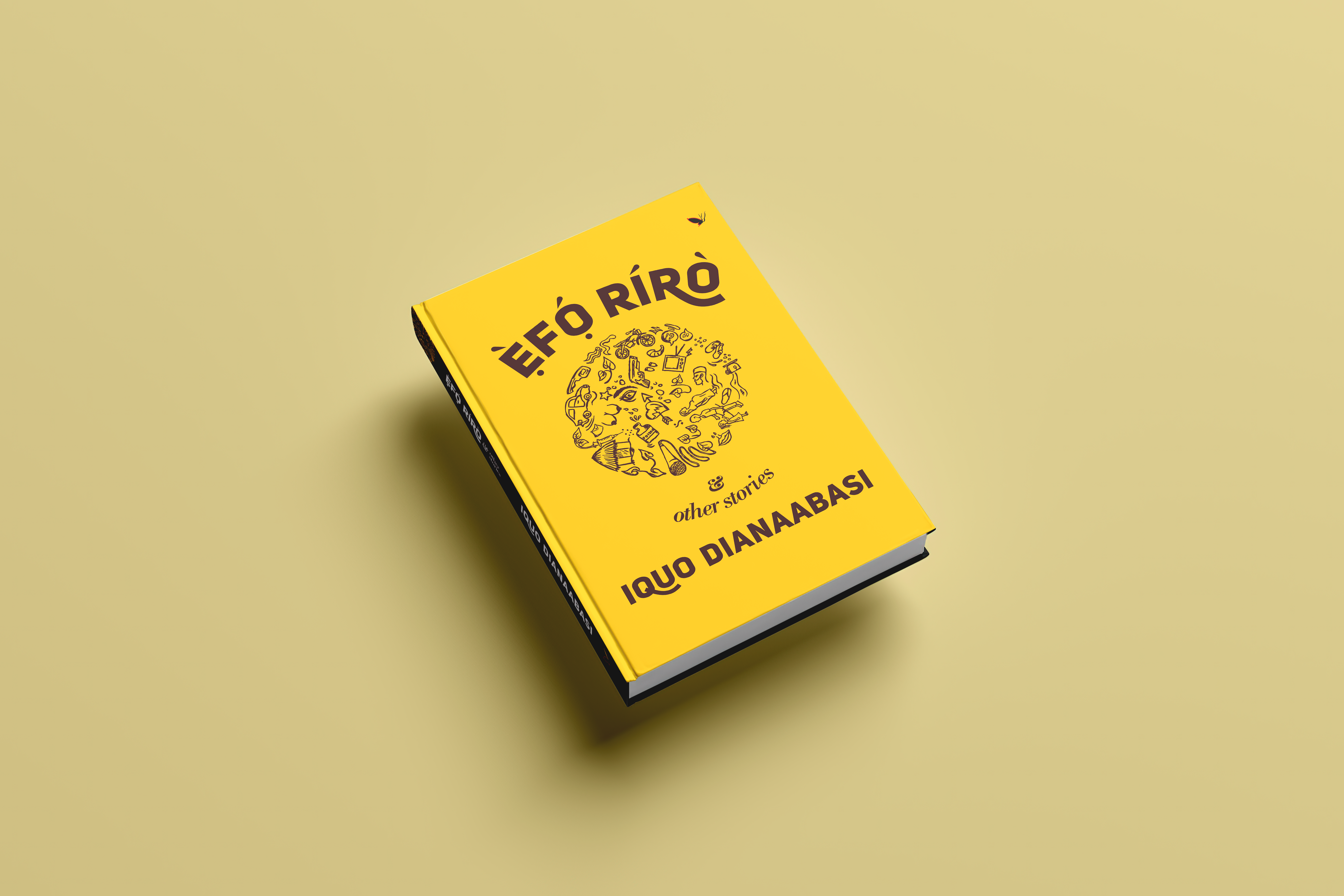 Posted at 12:08h in Reviews by The Parrésia Blog 0 Comments
0 Likes

Iquo DianaAbasi’s debut collection of short stories, Efo Riro (Parresia 2020), puts meat on the bones of the observation that the sense of taste is somehow wired to things that we find delightful or repulsive. Consider psychiatry where condemnation of the violation of moral values are, at times, expressed in strong gustatory terms. A recent literary example is that of Binta’s retch in Abubakar Adam Ibrahim’s Season of Crimson Blossoms:

There was even a night at Ake Festival 2017 when Ama Ata Aidoo described a book as “delicious”.

The nineteen stories in Efo Riro each explore the ways we describe feelings with tasteful remarks or respond gustatorily as if we can truly taste emotions. Efo Riro refers to delectable and rich vegetables steamed in peppery sauce with a fusion of all sorts of ingredients: videlicet, fish, meat, crayfish, etc. Commanding different reactions that we as readers are prompted to feel in our mouths, so, too, the taste buds become the filter through which DianaAbasi’s characters digest emotions and navigate the varied mixture of everyday experience.

Altogether, these nineteen stories bring out delectable and not-so-delectable emotions of the characters as we find out how love, rascality, betrayal and infatuation may actually taste. In ‘Birthday Chronicles’, a teenager has a taste of what his future might turn into and it fills him with bile to the extent that he determines he must change his own narrative; in ‘Duke of Canterbury’, what betrayal and breakup taste like is explicated with a ring of onions on the tongue of a woman; in ‘Yellow Slipper’ a woman, believing the way to a man’s heart is through his stomach, throws herself into preparing her lover a dinner and then comes to a shocking revelation; and in ‘Monkey Tale’ the kitchen becomes a place where amoral behaviour is confronted. It is in the stories ‘Efo Riro’ and ‘Champions of a Blue Sky’ that we taste the characters’ lives in ways that most exemplify the collection.

In the eponymous and comic short story ‘Efo Riro’, DianaAbasi allows herself the linguistic freedom to write entirely in Pidgin English through the first-person perspective of a driver named Sixtus, in the kind of language probably befitting his average education as a driver. He begins: “I know say I don make serious mistake when my belle dey begin skabash, dey speak in tongues as I pass Ògúnlànà Drive (1). The humorous language coupled with the jocular narrative voice makes the story doubly comic. And not only that, as the story unfolds with proper street lingo and figures of speech that elevate the narrative, we find the language is enriching: “When I enter inside di buka and air condition hug me like woman wey don miss her bobo finish, I begin reason am say maybe heaven don open branch office for here (2).

The narrator drives his vehicle, a red Toyota Venza belonging to his boss, into the premises of a restaurant called ‘Chop & Quench Buka’, loosely translating into ‘eat and die restaurant’. He hands over the vehicle’s key to a supposed steward he meets at the doorway to park it for him so he may enjoy his meal without interruption. And so he settles into a very scrumptious meal:

“As I pay for my pounded yam and efo riro with goat meat stew and one king-size ogunfe, na to chop di food remain. Ol’boy, come see as my belle shift gear enter choir! I no go lie, when di fresh green vegetable soup enter my mouth with plenty dry fish and ponmo wey balance inside am, I know say if I quench after dis food, I don die well be dat.” (2)

Here, we see a man who delights so much in a good meal, who likely would give anything to make himself comfortable so that he may enjoy his food. His thought is like a paean to the gustatory – but this proves to be his undoing, in an unravelling that will probably cause explosive laughter in many readers because ‘April fool don jam man pikin for January!’ (3) 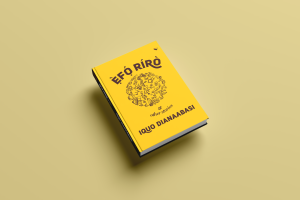 Throughout, DianaAbasi uses a mix of Englishes which gives the stories pertinence. In this deft use of Pidgin in ‘Efo Riro’, the perennial question rears up: for whom do African writers write? In this context, it is clear that DianaAbasi’s primary audience is her people, those who can understand her use of language. Some readers find Pidgin English exasperating because they cannot understand it but the author cares little about this; she comes from the south-south region of Nigeria where Pidgin English is considered a mother tongue. Here DianaAbasi joins the ranks of Frank Aig-Imokhuede, Ken Saro-Wiwa, Odia Ofeimun and Tade Ipadeola, amongst others, who have written stories or poems entirely in Pidgin English. Likewise, she also joins the likes of Chuma Nwokolo, and Eghosa Imasuen in writing in that distinctive variety of English that can be termed as ‘Nigerian English’, widening the debate about what exactly Nigerian English is, a topic that has always been for grammarians, linguists and lexicographers and which my forthcoming review of another Nigerian volume of short stories, How to Spell Naija by Chuma Nwokolo enriches (for Wawa Book Review).

Not all the stories are written in Pidgin English. The rest are in fact written in “standardised” English and sometimes with traces of Nigerian English. In ‘Champions of a Blue Sky’, for example, a husband fails to return home after a Champions League semi-final match. In Africa, European football, especially the English Premier League in Nigeria, commands much passion and zest across all age brackets and genders, but notably male youth. DianaAbasi captures the mania of a typical European Champions League night on African soil:

“The buzz in the neighbourhood was reminiscent of student riots in times past. There was hardly a corner Rasheeda turned that the football frenzy did not threaten to drown her in a deluge of anger and pain. The stores were filled with football fans, and the electric poles were painted or draped in blue as far as she could see. At the bus stop, boys and young girls were dressed in different Chelsea jerseys.” (44)

DianaAbasi uses this chaotic atmosphere to narrate the anguish of Rasheeda, a wife whose husband has gone missing after a match between Chelsea and Barcelona. Rasheeda is a faithful wife who loves her husband. She developed some interest in football because of her husband, Ismail, but when he goes missing, the game and the excitement surrounding it all seems absurd to her. She searches for him with the help of relatives and well-wishers, and in her desperation, the search leads to the local police station:

“Area F police Command had boys and men alike, in varying states of torture; one-eyed swollen faces, swollen lips, broken limbs, blood spurting wounds, smelly and infested scabs, and some inmates who could not even manage to stand straight. As Rasheeda left the police command that evening, she prayed that Allah would have mercy on Ismail and leave him dead at the hand of hooligans, instead of letting him end up like any of the men she saw at Area F Command.” (46)

After seeing the inhuman treatment detainees are subject at the station, Rasheeda would rather her husband be dead than languish in police custody. In the wake of #EndSARS protest, a protest against police brutality in Nigeria, this passage attests to the helplessness and randomness with which anybody can become a victim of police brutality. It is known that the police use the European Champions League match as a pretext to make random arrests, or even to kill, as in the unfortunate story of Kolade Johnson, who was murdered by officers with the anti-cultism police unit when leaving a football match viewing centre in Lagos in 2019. Rasheeda dreams up the worst and prays that her husband has not similarly fallen victim.

Rasheeda mourns her husband’s absence, tolerating insults from the advances of other men, while all the while the ache of longing and material want gnaws at her resolve. Eventually, another man warms his way into her heart by being persistent in providing food to her family. Yet still the question lingers: what really happened to Rasheeda’s former husband? It is a conclusion the author does not fully unravel at the end of the story, one in a number across the collection where the endings will challenge the reader’s imagination.

As Chuma Nwokolo writes in the blurb: ‘These are seasoned tales, with punchlines to surprise even the jaded.’ While the underlying motif of most of the stories in the collection is their appeal to the tongue, the thematic concerns range from domestic abuse – awakening our empathy and indignation against violence towards women – loss, and traditional dogma, among others. Efo Riro is a delicious collection of short stories, showing how taste matters greatly in our everyday life.