Book Excerpt: An Orchestra of Minorities by Chigozie Obioma 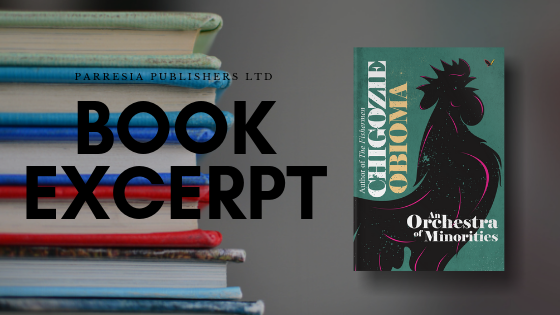 19 Jun Book Excerpt: An Orchestra of Minorities by Chigozie Obioma

Posted at 12:48h in Articles by The Parrésia Blog 0 Comments
0 Likes 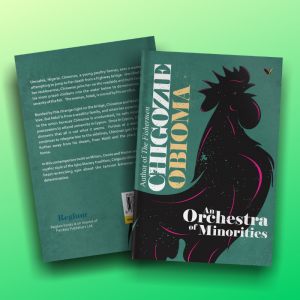 …The eastern darkness had fallen, and the road ahead and behind was blanketed in a quilt of gloom, when he returned to the van with a bunch of bananas, a pawpaw and a polythene bag full of tangerines. He put on his headlights and drove back on to the highway, his new flock squawking in the back of the van. He was eating the bananas when he arrived at the bridge over the Amatu River. He’d heard only the previous week that – in this most fecund of rainy seasons – the river had overflowed and drowned a woman and her child. He didn’t usually put stock in the rumours of mishaps that passed around the city like a weighted coin, but this story had stayed in his mind for some reason which even I, his chi, could not understand. He was barely at the middle of the bridge thinking of this mother and child when he saw a car parked by the railings, one of its doors flung wide open. At first, all he saw was the car, its dark interior and a speck of light reflected on the window of the driver’s side. But as he shifted his gaze, he caught the terrifying vision of a woman attempting to jump over the bridge.

Agujiegbe, how uncanny that my host had been thinking for days about a woman who’d drowned, and suddenly he found himself before another who had climbed one ledge up the rails, her body bent over as she attempted to throw herself into the river. And once he saw her, he was stirred within. He pulled the van to a halt, jumped out, and ran forward into the darkness, shouting, ‘No, no, don’t. Please, don’t! Don’t do that. Biko, eme na! ’

It seemed at once that this unexpected intervention startled the woman. She turned in swift steps, her body swaying lightly as she fell backwards to the ground in obvious terror. He rushed forward to help her up. ‘No, Mommy, no, please!’ he said as he bent over.

‘Leave me!’ the woman cried at his approach. ‘Leave me. Go away.’

Egbunu, rejected, he drew back in frantic steps, his hands raised in the strange way the children of the old fathers use to signify surrender or defeat, and said, ‘I stop, I stop.’ He turned his back to her, but he could not bring himself to leave. He feared what she would do if he left, for he – himself a man of much sorrow – knew that despair was the disease of the soul, able to destroy an already battered life. So he faced her again, his hands lower, stretched before him like staffs. ‘Don’t, Mommy. Nothing is enough for somebody to die like that. Nothing, Mommy.

The woman struggled up to her feet slowly, first kneeling, then raising her upper body, all the while with her eyes fixed on him and saying, ‘Leave me. Leave me.’

He glimpsed her face now in the pupillary light of his van. It was full of fear. Her eyes seemed somewhat swollen from what must have been long hours of crying. He knew at once that this was a deeply wounded woman. For every man who has himself suffered hardship or witnessed it in others can recognise its marks on the face of another from a distance. As the woman stood trembling in the light, he wondered whom she may have lost. Perhaps one of her parents? Her husband? Her child?…

Purchase An Orchestra of Minorities by Chigozie Obioma from Page Bookstore.