A Review of Ever Obi’s Book ‘Men Don’t Die’ 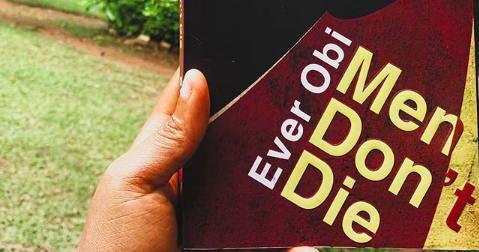 Posted at 18:53h in Uncategorized by The Parrésia Blog 0 Comments
0 Likes

I am sure that we can all agree that adulting is a scam and that some people have it easier than others. ⁣
Now consider this:⁣ You stumble upon a treasure that promises an easy way out all your problems – one that is immoral and illegal but its theft can never be traced back to you. Would you take it or leave it and continue to hope that your hard work will pay off someday?⁣⁣⁣

This was the plight of Brume Lauva, a twenty-eight-year-old, second class upper degree holder from the faculty of Engineering, FUTO. He follows his father’s advice and engages in honest work for eight years to make a living while hoping for a better tomorrow. But his life falls apart when his girlfriend of eight years, rejects his marriage proposal because he is poor. As if that was not enough, he loses his job. After a failed attempt at suicide, he stumbles upon a stolen lucre containing enough money to obliterate all his problems. Stuck between the devil and the deep blue sea, Brume takes a decision that is bound to change the course of his life forever.⁣⁣⁣

I have mixed feelings about this book. After reading the blurb, I wrongly assumed that it was crime fiction. So I was confused when I had read more than half of the book and was yet to see any action. It wasn’t until I got to the last page that I realised what it was really about and I think this was a deliberate act by the author. There is a nerve-wracking plot twist of the end of the book that I could have never anticipated. I did not like the effect it had on the story, but it answered a lot of questions I had about the plot.⁣⁣⁣

I applaud the author for being so adventurous in his debut novel. It was a risk that produced a brilliant and suspense-filled story. So although I am not super impressed by the writing, I appreciate that it takes an excellent mastery in writing to spin an idea as grand as this one into a flawless story.